Greece June 15: Scaled out Walk Out Walk On

Learning to ignore the mainstream media…friends hosting and reporting from Athens:

What is happening in Greece is a large scale walk out and walk on – a gathering of people who are reclaiming life – people who know self organisation and are re-membering to this. Yesterday – we were not demonstrating or protesting – we were standing up to life – saying yes to ourselves hand making our lives again (as our fathers and mothers did – as our grandmothers and grandfathers did – as our ancestors did) – because if we do not do this – we do not live life.

There was no violence between those of us that gathered. The violence came from our own riot police, who tear gassed us repeatedly for 3 hours hoping to disperse the collective energy – and who also created physical violence by planting people who caused physical damage to buildings (police were caught on camera handing out batons to their plants to do this). Tear gas was used completely openly and with no provocation – including being sent right into crowds on syntagma square who were dancing and singing to beautiful live music that some of our musicians were offering. A symbol of a dying system that is not willing to open up to the new.

The spirit amongst us was incredible – we moved as one as we were tear gassed – helping each other – of all ages. When we could not see or breath for the chemicals, we sprayed each other with malox – when we needed to offer water we gave to each other. When the despair, anger or fear became too much and provocation of the riot police became to vocal and overwhelming, we calmed each other down. We sang and told jokes. We moved the riot police back – not by force – but with a strong fierce movement – a breath of saying no and yes at the same time.

We did not leave – they did not disperse us – actually by 6:00 p.m. we were collectively picking up the garbage and washing the streets of the chemicals – preparing to receive the others who were going to join us. By nightfall – we were hundred of thousands – if not millions. There was chanting, singing, dancing, people’s assembly happening in the middle of Syntagma square (this happens every night – like in ancient Greece – since 25 March) – life was seriously and lightly happening everywhere.

We are hosting ourselves – back to ourselves – what will happen next – who knows – but the dance is on…Maria S. 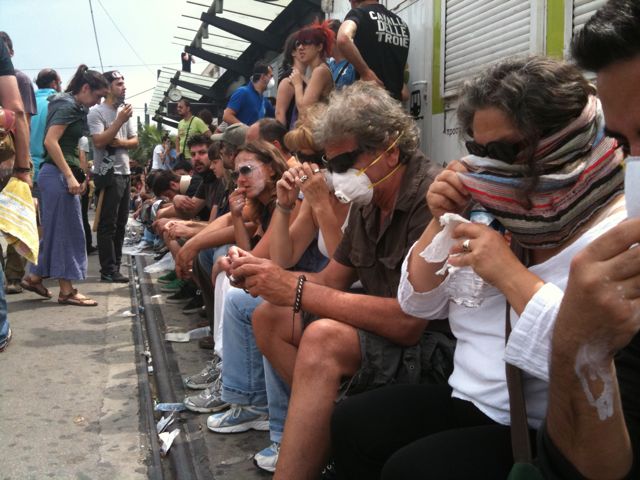 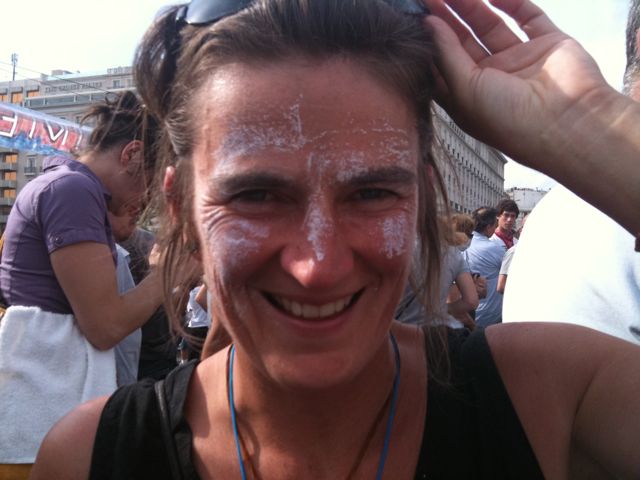